The swastika or swirling logs (in the US Native American groups) is such a unique symbol that it is very unlikely to have been created,in several different places, by independent invention-especially when it means much the same in widely varied cultures. "The word "swastika" comes from the Sanskrit svastika - "su" (meaning "good" or "auspicious") combined with "asti" (meaning "being")". From Wikipedia 5-26-2014. It should also be noted that the most ancient of the symbols come from the Middle East and become more recent as one moves away to Europe and North America. (The photos of beads from China, coin from Germany, beaded work and blanket from Indian groups in America, and the charm from India are modern-the rest are from antiquity.) This argues FOR mankind coming from one stock (people group) and spreading out from the Middle East as the Bible discusses. See below.

﻿   Dragon Images through time and cultures: A) From George Smith's book 1876; B) a Chinese dragon image dated 1244 AD from the Nine Dragon hand-scroll (from Wikipedia with permit), C) St George and the Dragon, 1800's lithograph; D) Stone carving of a dragon from Guatemala in a pre-1920 text; F) copy of an old Chinese coin with a dragon; G) Tyndale bible, 1552, figure from the book of Revelation with an image of the great Dragon.
Some researchers think that the images of dragons reflect that human beings have had exposure to dinosaurs. There are no reasonable living reptiles that fit the characteristics of the dragon.
They are  unique animals or living beings, viewed in all cultures as having great, even supernatural powers, are evil, and that man and God(s) must fight against them.
( A somewhat similar distribution has been observed with art relating to "horned serpents".)
This supports the concept of mankind coming from one stock (people group), and this is consistent with the Noah Flood Account. ﻿
﻿See my dissertation on the Noah Flood Account on this website, click below, for a more detailed discussion of common anthropological evidences for the commonality of mankind coming from one people group. ﻿
Noah Flood Account as a TNR

The Sources for the images of Horned serpents are as follows. A) Petroglyph Tsirege NM of the "Awanyn horned water serpent diety". From Wkipedia US government photograph., B) Mittani Cylinder seal, Northern Syria/Anatolia, dated 1450 B.C. casting of seal and roll-out, C) Pictograph Chaco Canyon NM uncertain age, D) Egyptian wall painting J. Hoe with permission, E) San Rafael Swell Barrier Canyon Style Utah age uncertain with permission Wikipedia-Markarian 421, and F) Amedia Northern Iraq from J Harris with permit. In reviewing various references the serpent had certain supernatural powers, usually evil, and affecting nature.
The association with the snake in the Garden of Eden is clearly present, and consistent with all mankind having had a revelation of satan (as described in the Bible) and of God from the creation of man. It is also consistent with a common source of man post flood.

Composite of Swirling Logs/Swastika and Horned Serpent found throughout History of Mankind and Throughout the Cultures of the World:Consistent with the Noah Flood Account 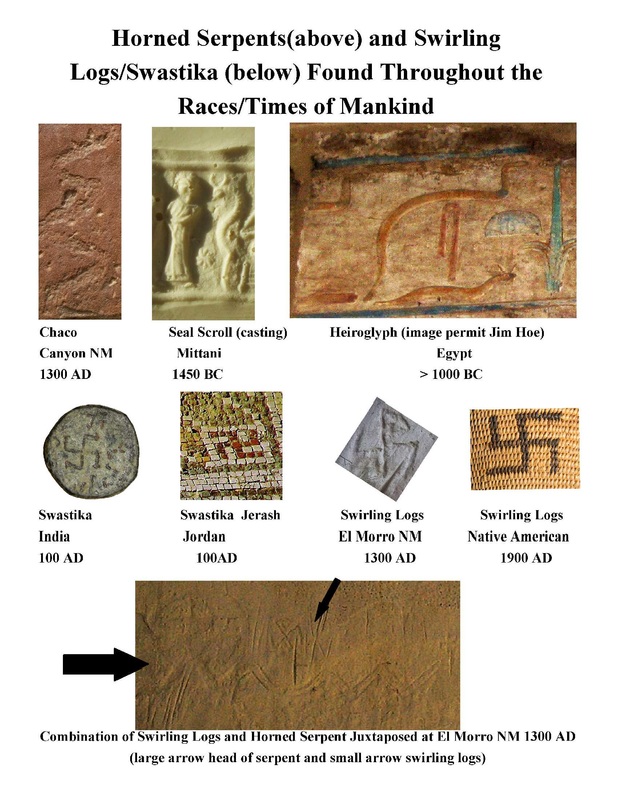 The Tree of Life (Found throughout the Ages and on different Continents) To be done soon.