The Creator's Plan for You
How to be Born Again

Ancient writings and all or almost all cultures of the world teach about the Creator, a worldwide flood which destroyed the surface of the earth because of the sins of man, and the need of a blood sacrifice to atone for those and the continuing sins of man to be at peace with Almighty God.
The sacred scriptures of the Bible teach that as a man Jesus Christ came from God, to die as the blood payment for all men's sins, and that whoever accepted His sacrifice for their sins would be forgiven of them. As God, Christ Jesus could then give them new life, by recreating the hearts (within their spirit by the power of God's Holy Spirit) of those forgiven. They could then, grow in the grace and knowledge of God the Father, and live eternally with Him now and after death.

​
Would you like to do this? If so, the AACTS steps below are suggested:
1) The book of Romans 3:23 says, "For all have sinned' (disobeyed) "and come short of the glory of God." Admit that you have sinned.
2) Romans 6:23 states, "For the wages of sin is death, but the gift of God is eternal life through Jesus Christ our Lord." Acknowledge that sin is leading you to death (physically, emotionally, and spiritually), and turn to God and away from sin (repent) asking Him to save you from your sin. He will do it.
3) For Romans 10:9-10 says, 9) "that if you confess with your mouth Jesus as Lord, and believe in your heart that God raised Him from the dead, you will be saved; 10) for with the heart a person believes, resulting in righteousness (right standing with God) and with the mouth he confesses, resulting in salvation," (freed forever from the punishment of sin).If you Confess (act on) the Teachings of the Bible, that Jesus is Lord and He died for your sins and was raised from the dead, you will experience Salvation.
4) So AACTS now! And get involved in a local church that teaches the Bible.
Scriptures are from the NASB with permission.
Please Note: one reader commented that I had not included repentance in the above. It is to be understood when one accepts that he or she is a sinner and it is leading them to death and turns to Christ to accept Him as savior that in that process one is repenting or turning away from sin. Sin is missing the mark or purpose God has for an individual's life.
​
(The tract below is made by JGL and may be downloaded and distributed free of charge, and must remain unaltered. And  painting of western adobe church above is by JGL. It may be reproduced for non-profit purposes with acknowledgment that it is done by John G Leslie. ) 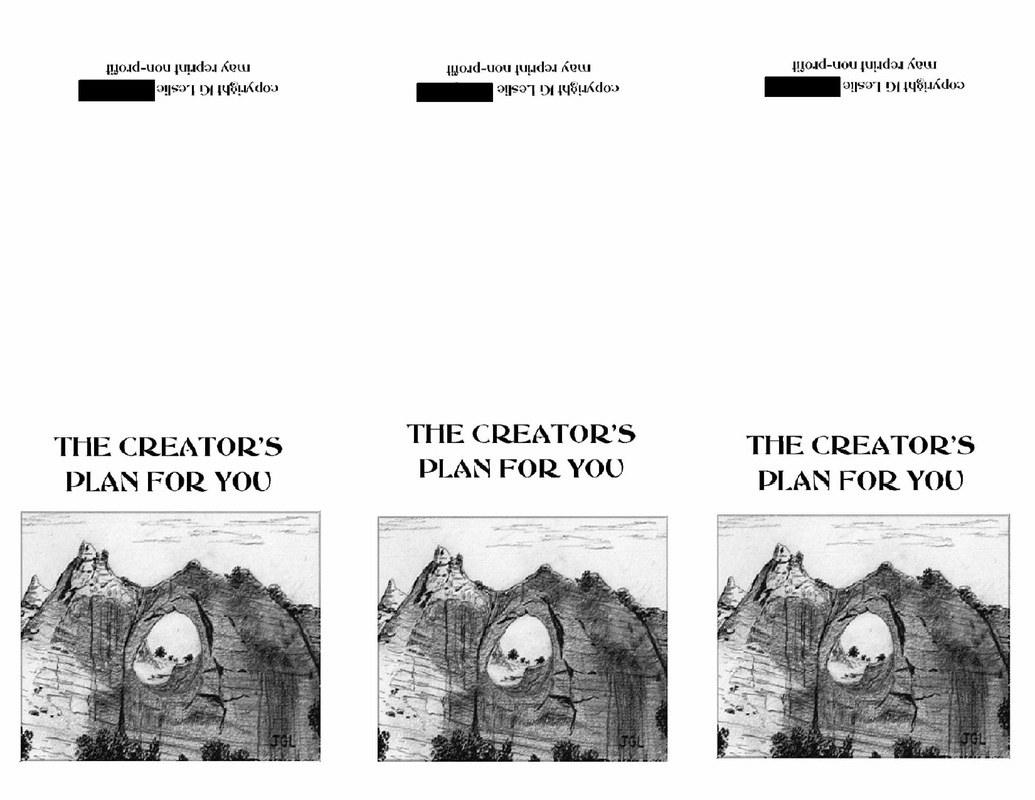 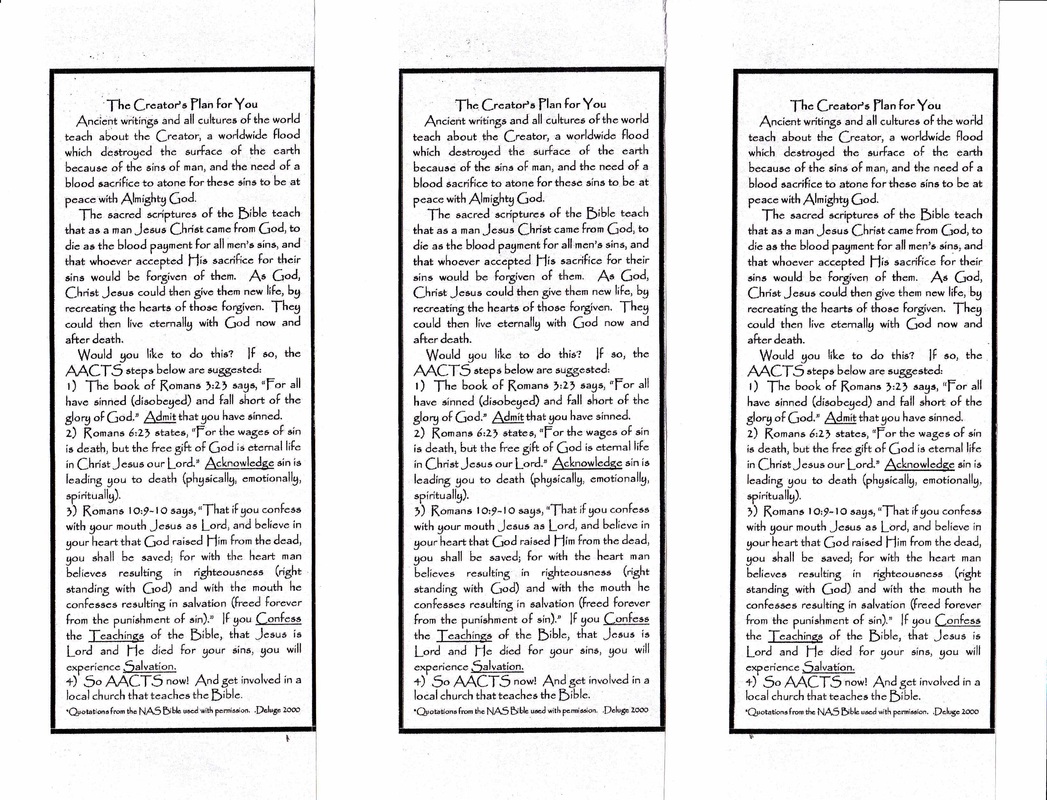 "Pentecostals and charismatics believe that all Christians have the Holy Spirit dwelling in them. However, they believe that the experience commonly called "baptism in the Holy Spirit" is a separate and distinct experience occurring sometime after regeneration. It is an empowering experience, equipping Spirit-filled believers for witness and ministry. Extending from this is the belief that all the spiritual gifts mentioned in the New Testament are to be sought and exercised to build up the Church. It is Spirit baptism that initiates the believer in the use of the spiritual gifts.Pentecostals and charismatics look to the Bible to support their doctrinal position. According to their biblical interpretation, the Gospel of John 20:22 shows that the disciples of Jesus were already born again before the Holy Spirit fell at Pentacost. They then cite biblical examples in the Book of Acts 2, 8, 10, and 19 to show that it was common in the New Testament for Spirit baptism to occur after conversion. In following the biblical pattern, they argue, Christians today should also ask Jesus for this baptism which results in greater power for ministry and witness." (From: Wikipedia Baptism of the Holy Spirit online 8-26-13)

Luke 3:16 "John answered, saying unto them all, 'I indeed baptize you with water; but One mightier than I cometh, the straps of whose shoes I am not worthy to unloose. He shall baptize you with the Holy Ghost and with fire.' "

John 20:19-22
19 "On the evening of that first day of the week, when the disciples were together, with the doors locked for fear of the Jewish leaders, Jesus came and stood among them and said, 'Peace'be with you!'
20 After he said this, he showed them his hands and side. The disciples were overjoyed when they saw the Lord.
21 Again Jesus said, “Peace be with you! As the Father has sent me, I am sending you.'
22 And with that he breathed on them and said, 'Receive the Holy Spirit.' "

Luke 24:36-40;49-51
36 "And as they thus spoke, Jesus Himself stood in the midst of them and said unto them, “Peace be unto you.'
37 But they were terrified and afraid, and supposed that they had seen a spirit.
38 And He said unto them, “Why are ye troubled, and why do thoughts arise in your hearts?
39 Behold My hands and My feet, that it is I Myself. Handle Me and see, for a spirit hath not flesh and bones, as ye see Me to have.”
40 And when He had thus spoken, He showed them His hands and His feet....
49 And behold, I send the promise of My Father upon you; but tarry ye in the city of Jerusalem until ye be endued with power from on high.”
50 And He led them out as far as to Bethany, and He lifted up His hands and blessed them.
51 And it came to pass, while He blessed them, He was parted from them and carried up into Heaven."

Acts 2:1-4
1 "And when the day of Pentecost was fully come, they were all with one accord in one place.
2 And suddenly there came a sound from heaven as of a rushing mighty wind, and it filled all the house where they were sitting.
3 And there appeared unto them cloven tongues like as of fire, and it sat upon each of them.
4 And they were all filled with the Holy Ghost, and began to speak with other tongues, as the Spirit gave them utterance."

Acts 8:14-17
14 "Now when the apostles which were at Jerusalem heard that Samaria had received the word of God, they sent unto them Peter and John:
15 who, when they were come down, prayed for them, that they might receive the Holy Ghost:
16 (for as yet he was fallen upon none of them: only they were baptized in the name of the Lord Jesus.)
17 Then laid they their hands on them, and they received the Holy Ghost."

Acts 10: 44-48
44 "While Peter yet spake these words, the Holy Ghost fell on all them which heard the word.
45 And they of the circumcision which believed were astonished, as many as came with Peter, because that on the Gentiles also was poured out the gift of the Holy Ghost.
46 For they heard them speak with tongues, and magnify God. Then answered Peter,
47 Can any man forbid water, that these should not be baptized, which have received the Holy Ghost as well as we?
48 And he commanded them to be baptized in the name of the Lord." ...

Acts 19:1-6
1 "And it came to pass, that, while Apollos was at Corinth, Paul having passed through the upper coasts came to Ephesus: and finding certain disciples,
2 he said unto them, Have ye received the Holy Ghost since ye believed? And they said unto him, We have not so much as heard whether there be any Holy Ghost.
3 And he said unto them, Unto what then were ye baptized? And they said, Unto John’s baptism.
4 Then said Paul, John verily baptized with the baptism of repentance, saying unto the people, that they should believe on him which should come after him, that is, on Christ Jesus.
5 When they heard this, they were baptized in the name of the Lord Jesus.
6 And when Paul had laid his hands upon them, the Holy Ghost came on them; and they spake with tongues, and prophesied."

The Story of Jonah (A story of God's grace and repentance as told by a 5-6 y/o girl. Out of the mouth of babes will God proclaim His Word.)

The Story of Jonah

Defending the Faith in the Last Days

The Beauty of God's Creation (In the midst of Corruption)

The Beauty of God's Creation

Christian Websites that promote the Bible and Gospel of Jesus Christ