There is the human desire to make meaning out of our existence on this physical earth by asking where did we, as humans,  the animals and plants of the earth, come from and the origin of life. But as is explained in the section regarding religion, philosophy, and science these questions, e.g. regarding the origins of life and other similar questions, can not be answered by science alone. That is because science involves observations of the current physical universe and its properties. From this technology can be developed. But past unique events that are not observed cannot  be place within a  scienctific framework alone to explain these events. To attempt to do so requires non-testable extrapolations and assumptions. The lack of understanding this concept or rejecting it for possible political and religious reasons has led to a confounding and diminishing of teaching students the proper application of science. At present, students are being feed the dogma (or worldview) of evolution as if it were science. It is not. But the observations of science can be put into this worldview or the creation worldview. Evolution requires the concept of uniformitarianism, and that of Creation catastrophism as constructs in which to view scientific data regarding questions of origins.

As evolution is now considered a fact, to many, there has developed a whole new set of terms to support this worldview. Yet, the teaching of these terms along with actual structural/functional terms of science requires a student to memorize two whole sets of different terms and confounds the concepts of science with those of a religio-philosophic worldview.

In the above diagrams the worldviews of Creationism (including catastrophism) and Evolutionism (including uniformitarianism) are represented. The facts of science can be put within either system. The uniformitarian figure is derived from a painting that has been at the Petrified National Forest Park,AZ (Where evolutionism and uniformitarianism is taught as a fact). Below Articles can be scrolled to read. The print can also be enlarged by clicking the plus magnifier glass. 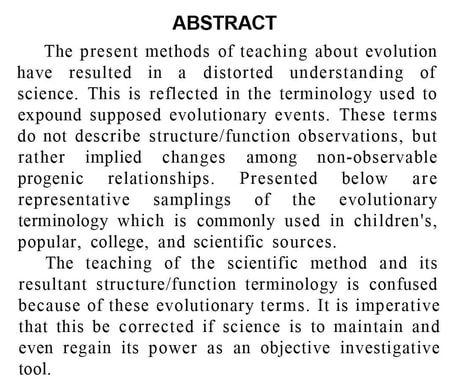 See article below for more information.
Hindrance of Evolutionary Terminology-CMI
How evolution has harmed science and society
Feedback archive → Feedback 2012 Published: 24 November 2012 (GMT+10)
This week’s feedback features responses from regular contributor Marc Ambler and CMI’s Dr Don Batten to skeptics who object to us saying that evolution has harmed science and society...

John L.
US November 25th, 2012
CMI,
Thank you so much for continuing to address the issue that evolution is not a scientific theory. It is a worldview built upon certain religio-philosophic assumptions. It has never been demonstrated in the laboratory beyond variation (which is not the same transmutation from one living type to another type). And it, Evolution, has been shown to be based upon the foundation of a chosen godless beginning for all of the origin of matter and life and the laws that govern them…(see article for rest of comments by myself and others.)
How Evolution Has Harmed Science and Society

Why I Believe in God and not Evolution-a handout

​Why I Believe in God and Not Evolution
I believe there are strict scientific, philosophical, and religious reasons to not adhere to evolution. Design evokes a designer/creator. Nature and the observations of science support this concept. There are definable, reproducible phenomenon in nature (i.e. the law of gravity). Common design principles are seen among various life forms, e.g. light receptor systems, smell, locomotion, energy transformation, waste production, flight, and others. A common genetic code contains these details. Analogy has been made of the factory with the functions of the cell. The eye is compared to the camera, the digestive system with a fuel burning engine, eighth cranial nerve vestibular function with that of a gyroscope, etc. Nature abounds and attests of common design features - both within the organic and inorganic world. Man only utilizes design features already present in the natural world.
Contrary to what some scientists believe, there is little evidence to support a non-designed, mechanistic development (evolution) of life from non-life. Numerous studies have shown that life could not have developed from simple organic molecules on our present earth. Some have devised convoluted arguments as to how life began on another planet and was somehow transferred here (via comet, etc.), yet absolutely no substantial evidence exists for organic extraterrestrial life.
The concept of natural or artificial selection does not support evolution or transmutation from simple to complex life forms. It is even questionable whether there is such a thing as a simple life form. Regardless, many evolutionists believe that the mechanism of selective pressure on mutational alterations has resulted in this supposed progression. In contradiction, enhancing the mutation rates among fruit flies has done much to help in the understanding of individual gene function, but has scant effect in changing fruit flies into other organisms. In fact, just the opposite occurs. A fly with double the set of wings can't fly whereas the normal one can. An antenna in place of the eye is debilitating. The concept of gene mutational load and the necessity of DNA repair mechanisms argue against the usefulness of mutations. Natural selection does occur however; debilitated animals are removed from the herd by predators, or die from organic diseases. But this serves to preserve or even cleanse the gene pool from some of the effects of mutations. Thus, there is little empirical evidence that it forms the basis of transmutational (i.e. reptile to bird) change. In addition, most so-called vestigial organs have been shown to have a functional purpose - as knowledge has advanced, e.g., tonsils, appendix.
Some will say that the fossil record reveals the evidence for transmutation. Yet, certain non-empirical and preconceived ideas must be accepted concerning the record. I, for one, do not accept that the record was the product of slow accumulation of layer upon layer of sedimentary soil, with life forms occasionally trapped in it. There is much evidence for catastrophic deposition. Present conditions do not support the preservation of whole large animals by simply dying and settling in the ooze. Yet, catastrophic preservation of intact animals and humans has been shown at Pompeii. However, because animal and plant life lie together in a given strata, it does not follow that they necessarily lived together; but only that they may have been buried together. Even when one accepts some sort of slow progressive sedimentary buildup, there is not gradual transition from one life form to another. Because of this, and the absolute commitment to transmutational change, some have devised the concept of punctuated equilibrium, which surmises
that the transition occurred rapidly in small numbers not allowing for preservation of sufficient numbers of organisms. Thus, it is a non-verifiable idea to explain why there is no evidence for transitional life forms. Using this concept some have propounded upward, sideward, and downward evolution. It may be a philosophy or paradigm, but it is not a working hypothesis, because it cannot be tested for falsity.
One might ask why when the observations of science cry out for design and a designer, do some scientists cling to a mechanistic (non-purposeful, non-designed) view of the universe. The reasons are probably as varied as the individuals involved. Some choose to believe in evolution because it allows them to dictate their own views of right and wrong. Unfortunately when whole societies have believed this it has led to anarchy. The so called battle between science and religion is really a battle of world views: the mechanistic view of life verses a creation view of life. Nonetheless, I do believe the concepts and observations of science better support design and thus a designer/creator.
For the above reasons and many others, I believe in God and not evolution.

The Teaching of the Bible in School: Benjamin Rush

Benjamin Rush (January 4, 1746 [O.S. December 24, 1745] – April 19, 1813) was a signer of the United States Declaration of Independence and a civic leader in Philadelphia, where he was a physician, politician, social reformer, humanitarian, and educator and the founder of Dickinson College. Rush attended the Continental Congress.[1] His later self-description there was: "He aimed right." He served as Surgeon General of the Continental Army and became a professor of chemistry, medical theory, and clinical practice at the University of Pennsylvania.
Rush was a leader of the American Enlightenment and an enthusiastic supporter of the American Revolution. He was a leader in Pennsylvania's ratification of the Constitution in 1788. He was prominent in many reforms, especially in the areas of medicine and education. He opposed slavery, advocated free public schools, and sought improved education for women and a more enlightened penal system. As a leading physician, Rush had a major impact on the emerging medical profession. As an Enlightenment intellectual, he was committed to organizing all medical knowledge around explanatory theories, rather than rely on empirical methods. Rush argued that illness was the result of imbalances in the body's physical system and was caused by malfunctions in the brain. His approach prepared the way for later medical research, but Rush himself undertook none of it. He promoted public health by advocating clean environment and stressing the importance of personal and military hygiene. His study of mental disorder made him one of the founders of American psychiatry. In 1965 the American Psychiatric Association recognized Rush as the "father of American psychiatry".Wikipedia  The article below is from the American Tract Society vol. 8 about 1820 (date not in booklet). 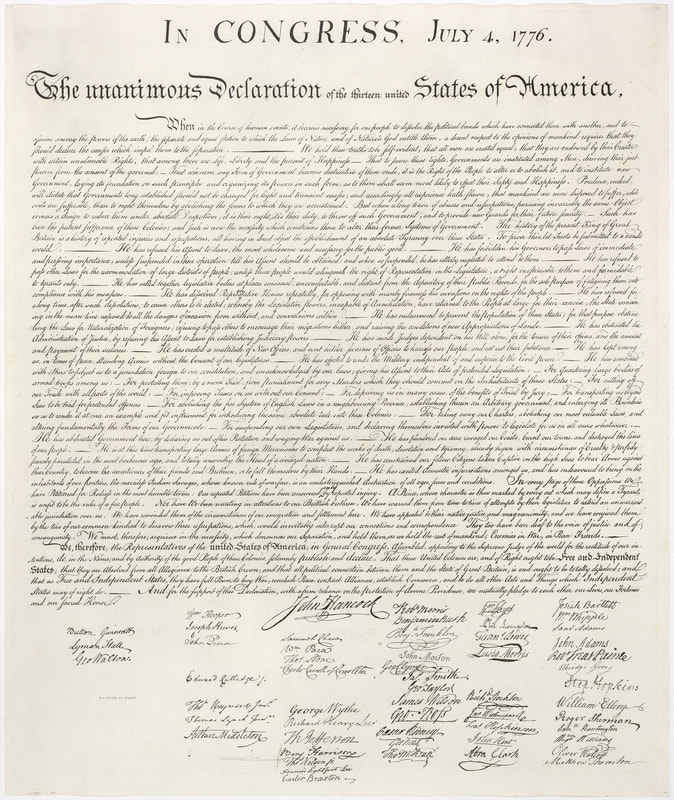 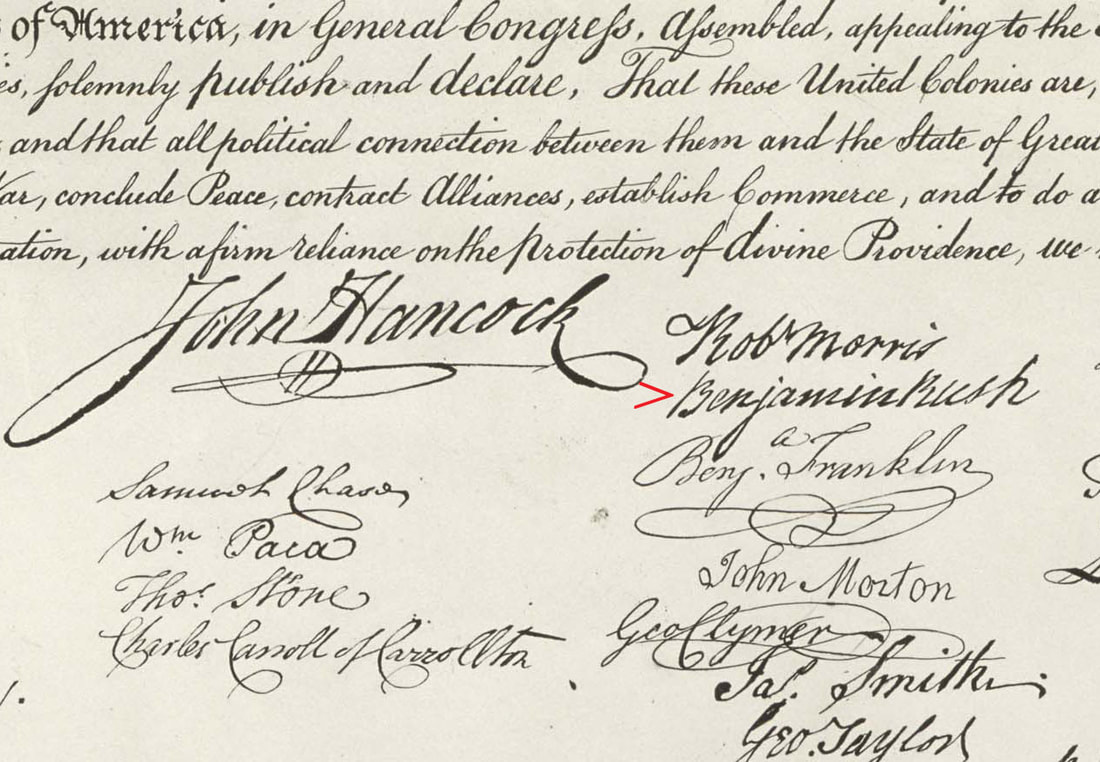 Benjamin Rush was a signer of the Declaration of Independence 1776. (See Red Arrow)