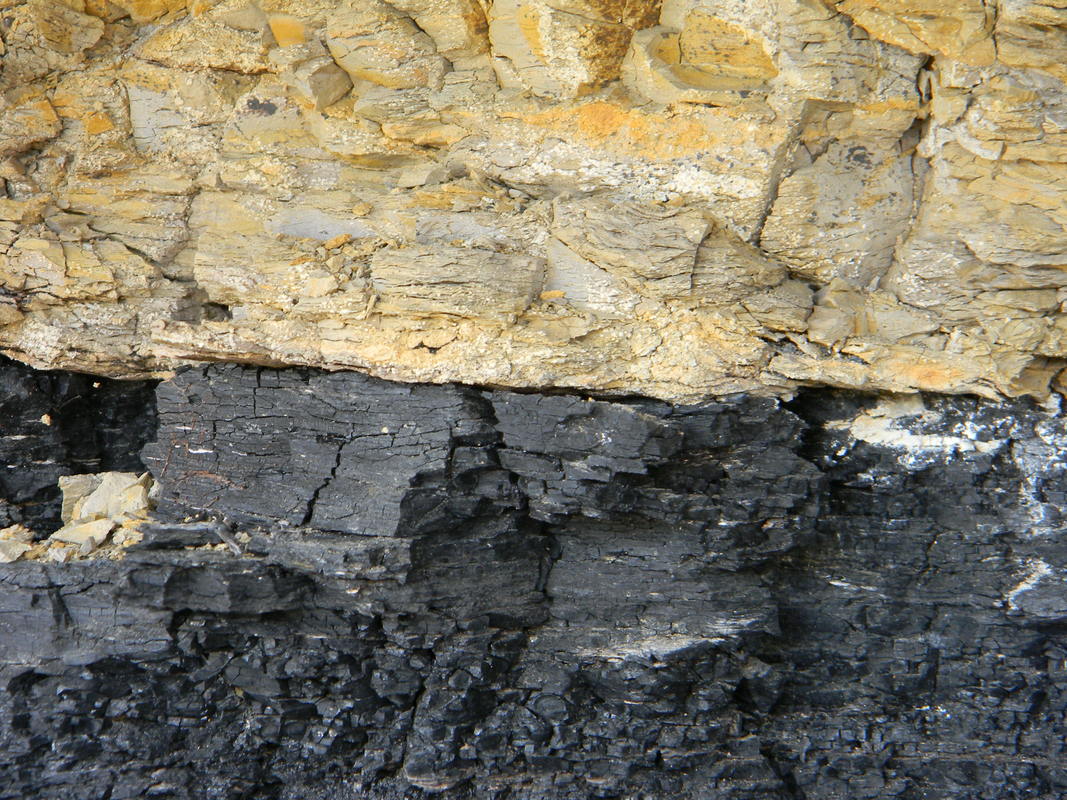 Contact of a coal seam and the sandstone strata above the coal seam. There is no (or very little) mixing. The coal gives the appearance of having been compacted vegetation (in an aqueous fluid) that was rapidly covered by a thick aqueous sand layer. Heat, drying and pressure would have chemically rapidly changed the vegetation to coal. Photo by JGL in New Mexico.
HISTORICAL SURVEY OF THE FLOATING MAT MODEL FOR THE ORIGIN OF CARBONIFEROUS COAL BEDS
Steve Austin and Roger Sanders
“Three depositional models have been offered for the origin of coal: (1) peat swamp model, (2) drift model, and (3) floating mat model. Many paleobotany questions about lycopods and tree ferns had not been solved at the end of the Nineteenth Century, but the “floating mat model” offered a very robust path to direct research. Unfortunately, at the beginning of the Twentieth Century when the uniformitarian paradigm prevailed, the floating mat model was intentionally suppressed. Now new data from coal petrology indicate that Carboniferous coal is detrital having accumulated underwater, not as a terrestrial swamp deposit. New data and methodology from paleobotany (Sanders and Austin, 2018) show lycopsids and tree ferns were capable of forming living floating mats able to support the trunks. Paleobotany of coal plants should now be best understood as supporting a floating raft that deposited the detritus that now forms Carboniferous coal beds. We present here for the first time a three-hundred-year historical survey of the notion that coal accumulated from floating vegetation mats.” Online from International Creation Conference 2018. (see link below)

Dr. Andrew Snelling holds a PhD in geology from the University of Sydney and has worked as a consultant research geologist in both Australia and America. Author of numerous scientific articles, Dr. Snelling is now director of research at Answers in Genesis–USA.
Dr Andrew Snelling-how coal forms