Ministers, Pastors, Educators Who Support a Literal Reading of Genesis

"The modern creation movement is mostly driven by those with primarily scientific qualifications. Some of a theological bent argue that us scientists don’t understand the ‘genre’ of Genesis (i.e. we are theological ignoramuses) and that Genesis is not meant to be understood as history. In part answer to this, I have listed here just some of those with theological qualifications who have taken a public stand for understanding Genesis as straightforward history, just as us scientists do. Those listed represent a wide spectrum, from pastors and evangelists to professors of church history, theology, and Hebrew, and from various church affiliations."


A sampling from the article is given directly below. See the whole list by clicking on the link at the bottom. Permit to post present portions of article given by Dr Batten.

A Partial List of Prominent Christian Leaders in Different Countries of the World that take a Literal Reading of Genesis as an Historical Document.

"'Dr Francis Humphrey, former lecturer (retired) in Old Testament Studies in the Faculté de Théologie Évangélique de Montréal, Acadia University. He was also the Senior Pastor of The Peoples Church of Montreal, Canada, until illness forced him to retire. He has written on the meaning of yom (Hebrew for ‘day’) in Genesis 1, clearly showing his support for a literal creation week. His book Origins and Redemption (Word Alive Press, 2013), also makes very clear his position.

﻿Dr Robert V. McCabe﻿, M.Div., Th.M., Th.D., is on faculty at Detroit Baptist Theological Seminary (teaching Old Testament and Hebrew). He has written an in-depth defence of a literal understanding of the six days of creation week in the Detroit Baptist Seminary Journal. He says of the importance of Genesis: “Genesis is the foundation for the remaining 65 books of the Bible. It reveals a number of subjects that have an impact on people of all ages: God’s existence; His goodness in creating the heavens, the earth and all things in both over the space of six, consecutive normal days; His direct creation of His divine image bearers, the first human beings Adam and Eve, on Day 6; His appointment of Adam as vice-regent over creation; the Fall of Adam along with the resultant Curse on the created order; the global Flood in Noah’s day; the tower of Babel; and the birth of the Israelite nation.”

Dr Albert Mohler is President, Southern Baptist Theological Seminary, Kentucky, USA, and Professor of Theology. Dr Mohler recognizes that it is not just ‘evolution’ that is a problem for the Gospel, but the push to accept long ages: “The Genesis account also teaches that God’s judgment on that sin has cosmic effects. If you adhere to an old-earth position, you have a very difficult time explaining how the effects of the Fall—death, disease and suffering—show up long before Adam and Eve.”

Dr Ting Wang lectures on biblical Hebrew at Stanford University in California. He has a M.Div. from Westminster Theological Seminary in California (Escondido), a doctorate in Biblical Studies at the Hebrew Union College, Jewish Institute of Religion (Cincinnati, Ohio). Amongst many affirmations of the historicity of Genesis, Dr Wang said,
'Often, people will use the old argument that we should concentrate on preaching the Gospel, rather than get distracted by ‘side-issues’ such as Creation. But if we cannot believe the record of Creation, then why believe the record of the New Creation (‘if anyone is in Christ, he is a New Creation; the old is gone, the new has come’--2 Corinthians 5:17)?”“If we cannot believe in the First Adam, why believe in the Last [1 Corinthians 15:45]? Death came through the First, life through the Last [1 Corinthians 15:21–22].'

Dr Benno Zuiddam, research professor (extraordinary associate) for New Testament Studies, Greek and Church History at the faculty of Theology at North West University, Potchefstroom, South Africa. He has earned doctorates in the fields of the Classics and Theology. He also serves with Greenwich School of Theology (UK) as tutor for Ph.D. projects.

Conclusion
All those mentioned above are ‘evangelical’ scholars; those who believe that the Bible is the inerrant Word of God. To them we might add the testimony of non-evangelical experts in Hebrew, such as Oxford University’s Professor James Barr, who clearly stated that the intention of the author(s) of Genesis 1–11 meant what was written to be understood as history (six literal days of creation, global Flood of Noah, a chronology of the world from the beginning). Other professors at leading secular universities agree with Professor Barr.'" 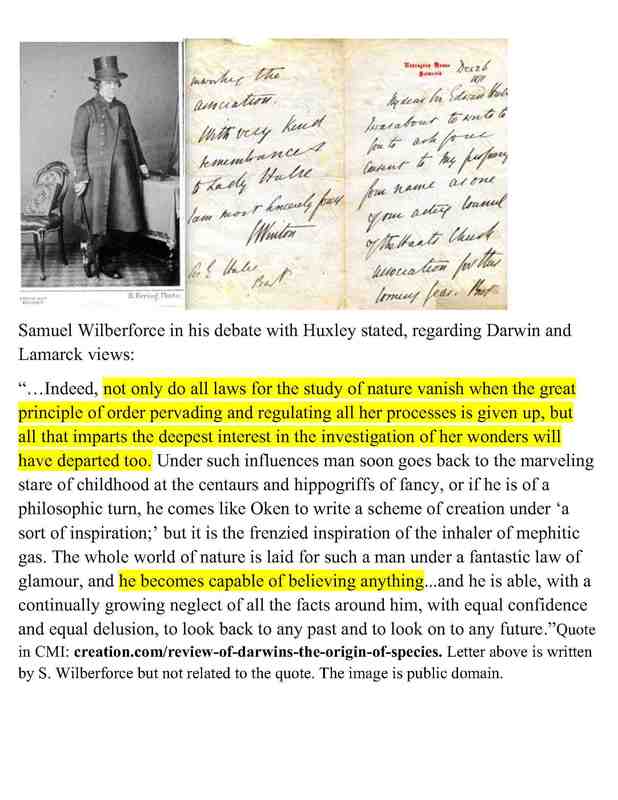 It is interesting that many commentaries state that Huxley won the debate-but the above quote has yet to be answered adequately by evolutionists.