Men (Scientists) Who Had a Reverence for God

Henry Morris, in a little book titled Men of Science Men of God (1982), gives a brief description of the founders of science and their belief in God. This little book had a profound effect in my life. He wrote, "...we should never forget that scientists are only ordinary people who have certain types of abilities and have had the opportunity of certain types of training, but who also have the same weaknesses and needs as anyone else. There is thus absolutely no reason why a scientist should not also be a man of religious faith, like anybody else. There is nothing in science that can ever prove that God does not exist and, therefore, no way that science can disprove the possibility of miracles or of true creation. Science cannot either "prove" or "disprove" such things, and so a scientist can decide for himself whether or not he will believe them....As a matter of fact, many scientists of the past and present have been and are Bible-believing Christians-sinners saved by grace, just like many farmers and clerks and homemakers, people in all walks of life." He then give an extensive list of scientists including some of the founders of modern science: Leonardo da Vinci, Johann Kepler, Francis Bacon, Blaise Pascal, Robert Boyle, John Ray, Nicholas Steno, Galileo, Robert Hooke, William Harvey, Christian Huygens, and John Harris. He then includes others such as Isaac Newton, Thomas Burnet, William Whiston, John Woodward, Carolus Linnaeus, Jonathan Edwards, William Herschel, Michael Faraday, Humphry Davy, George Cuvier, Benjamin Silliman, Samuel Morse, Charles Bell, William Buckland, Charles Babbage, David Brewster, Matthew Maury, James Joule, John Herschel, John Dalton, Louis Agassiz, James Dana, George Stokes, Rudolph Virchow, Gregor Mendel,Louis Pasteur, Lord Kelvin, Joseph Lister, James Clerk Maxwell, Bernard Riemann, Richard Owen, Edward Hitchcock, William Ramsey, A.H. Sayce, John Fleming, George Washington Carver, Douglas Dewar, Werner von Braun and others. Some believed in long ages for the development of the earth and many believed in short ages, but all believed in God creating it and all that exists. Images: some from Wikipedia with permit.
Men of Science Men of God-Book

Modern Scientists at Covention in 2005 titled "Radioisotopes and the Age of the Earth"
The RATE Project
﻿"﻿In 1997, the Institute for Creation Research launched the RATE project (Radioisotopes and the Age of The Earth) to study the fundamental assumptions on which evolutionists base their claims that the earth is billions of years old. In 2005, after eight years of intense research and writing. the project was successful beyond all expectation in helping resolve the apparent conflict between the billions of years estimated by the conventional scientific community and the thousands of years stated in the Bible. For more information on the results of this project, visit http://www.icr.org/research/rate/." Quote with permission from ICR.﻿
"The RATE team included the following scientists and scholars:
Steven A. Austin, Ph.D. Soft rock geologist, John R. Baumgardner, Ph.D. Geophysicist, Steven W. Boyd, Ph.D. Hebrew scholar, Eugene F. Chaffin, Ph.D. Physicist, Donald B. DeYoung, Ph.D. Physicist, D. Russell Humphreys, Ph.D. Physicist, Andrew A. Snelling, Ph.D. Hard rock geologist   Larry Vardiman, Ph.D. Meteorologist, Chairman." From: http://www.icr.org/research/rate/﻿

A Scientific Dissent from Darwin ﻿﻿(2014)﻿﻿: 800 scientists who have signed a document and agree with the following statement:“We are skeptical of claims for the ability of random mutation and natural selection to account for the complexity of life. Careful examination of the evidence for Darwinian theory should be encouraged.” Click on the button below to review the list.

Louis Agassiz's Opposition to Darwinism ﻿﻿(1807-1873)﻿﻿ In his last public writing he adamantly rejected Darwinism with many arguements that still stand today-written December 1873 in the Maine Daily Times. He was the leading naturalist of his day in the late 1800's. "Jean Louis Rodolphe Agassiz (May 28, 1807 – December 14, 1873) was a Swiss biologist, geologist, physician, and a prominent innovator in the study of Earth's natural history. He grew up in Switzerland and became a professor of natural history at University of Neuchâtel. Later, he accepted a professorship at Harvard University in the United States." (From Wikipedia.)
In a book written for the lay people of his time, in the 1860's called Zoology, Agassiz demonstrated that animal and plant groups have been unchanging from the deepest to the most superficial strata. These observational data were in stark contrast to Darwin's subjective conjecturing. However, it must be stated that Agassiz did accept long ages and periods of time for the earth. As has been shown in numerous more recent studies this was unnecessary. For example, Dr Snelling's work on C14/C12 ratios from different strata demonstrated that the ratio has remained virtually unchanged, which argues for a similar age for all the strata tested. See tab Evidence for a young age of the earth. Please note this is a slide show and can be stopped to read it.

Alexander Catcott ﻿﻿(﻿1725–1779)﻿﻿﻿ "was an English geologist and theologian born in Bristol, who became the vicar of Temple Church, Bristol and the author of numerous works on science and theology"[from Wikipedia]. He believed that the scriptures described a worldwide flood, and that it was supported by flood legends found on different continents as well as geological evidence. Evidence for a  worldwide Flood provides evidence against evolution and long ages for the earth. Please note that many of the leading scientists of this age were theologians. 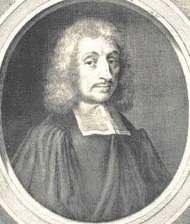 ﻿"R. J. BERRY
John Ray, Father of Natural Historians
John Ray (1627-1705) was a pivotal figure in both the history of biology and in our maturing of understanding the Bible in the light of secular knowledge. He was the son of an Essex blacksmith who became a Fellow of Trinity College, Cambridge, but resigned his fellowship to work with his pupil and patron Francis Willugby (1635-72) on a series of plant and animal classifications, which paved the way for Carl Linnaeus and inspired generations of naturalists. He is best known for his Wisdom of God Manifested in the Works of Creation (1691), which was plundered by Archdeacon Paley for his Natural Theology (1802). Although he lived when the rationalism of the Enlightenment was in the ascendant, Ray was not a deist; he was a man who rejoiced and worshiped God through studying God’s ‘book of works.’ His influence persisted throughout the 18th and 19th centuries, underlying the tensions that developed in natural theology and natural history with the impact of Darwin and the growth of scientific professionalism. Three centuries after his death, he provides both a model and a stimulus for a Christian approach to the natural world." Click below for entire article.﻿
John Ray Father of Natural Historians
John Ray in his Three Physico-Theological Discourses wrestles with reading the meaning of the Holy Scriptures with what scientific observation presented during his lifetime.


He made a key comment on page xi regarding whether the world was created in a moment or incrementally. "But if it were more ancient (than the scriptures reveal), it must still, in all likelihood, be divinely revealed, because man being created last, and brought into a world already filled and furnished: ﻿And God being an omnipotent, and also free agent, who could as well have created the world in a moment, or all together as successively, it was impossible for man by reason to determine, which way He made choice of." Comment in Parentheses by JGL.


He wrestles with the Noah Flood Account in his 2nd discourse. His reading of the scriptures causes him to reject the idea of a local flood by several observations:
1) page 61: Ancient writers throughout the earth talk of a flood.
2) page 71-117: He then discusses what it might have meant for the floodgates of heaven to open up and the breaking up of the deep to cover the earth.
3) pages 122-149: He struggles with  fossils, being found on the tops of mountains and with the vast numbers of them as being formed all during the Noah Flood. Yet, he acknowledges that many were probably from the Flood. He also accepted that fossils were the remains of former living organisms (which some philosophers had considered anomalies in the stones during this time period). On page 147 he considered that it may have been possible in the past that mountains were depressed and the waters could have covered these low lying areas by "earthquakes or subterranean fires". The concept of plate tectonics had not yet been developed.


The important point is that he acknowledged that the scriptures clearly taught a worldwide flood that could be studied in nature, and that without revelation from God man can not reason the beginnings of the world. Click below for online sources for two works of his.
Three Physico-Theological Discourses
Wisdom of God In Nature

Francis Bacon (1561-1626) "Sir Francis Bacon, 1st Viscount St. Alban, ﻿﻿Kt.﻿, QC﻿ (22 January 1561 – 9 April 1626) was an English philosopher, statesman, scientist, jurist, orator and author. He served both as Attorney General and Lord Chancellor of England. After his death, he remained extremely influential through his works, especially as philosophical advocate and practitioner of the scientific method during the scientific revolution.
Bacon has been called the creator of empiricism.[2] His works established and popularized inductive methodologies for scientific inquiry, often called the Baconian method, or simply the scientific method. His demand for a planned procedure of investigating all things natural marked a new turn in the rhetorical and theoretical framework for science, much of which still surrounds conceptions of proper methodology today." From Wikipedia 10-29-13
In the pages below he expressed a belief in a Creator (God) and a literal Flood.
This is a slide show and the  pause button can be pressed to stop and read the pages. CLICK ON THE PAGE TO ENLARGE IT.

Josephus says, ‘Genesis means what it says!’ by Frank Luke

"Many people who compromise on the plain meaning of Genesis claim that the literal interpretation is a modern invention. Instead, they claim that most commentators in the past took a long-age view. On the contrary, the vast majority interpreted the days of Genesis 1 as ordinary days...Among the Jewish commentators, the first-century historian Flavius Josephus (AD 37–ca. 100) stands out from the rest..'For we have not an innumerable multitude of books among us, disagreeing from, and contradicting one another, [as the Greeks have], but only twenty-two books, which contain the records of all the past times; which are justly believed to be divine; and of them five belong to Moses, which contain his laws and the traditions of the origin of mankind till his death. This interval of time was little short of three thousand years; … the prophets … in thirteen books. The remaining four books contain hymns to God, and precepts for the conduct of human life...'”
​
See link below for article online from CMI and originally in Creation 29(3):15–17 June 2007
.
Genesis Says What It Means