Naturalism-(excerpt from my book Defending the Faith)

Naturalism or positivism (the term used in the 1800's) was further defined according to Comte as "the whole body of human knowledge. Human knowledge is the result of the study of the forces belonging to matter, and of the conditions or laws governing those forces." In other words, there is nothing of relevance outside of the physical realm. This a priori assumption was not new with Comte. Hume propounded it in the 1700's (limiting it to sense knowledge) and even among the Greeks it was a common view. The Ionian philosophers such as Democritus (460-360 BC) stated, "in reality there are only atoms and the void"; there is no purpose or design only matter, form, and being destroyed in chaos. Many, such as Empedocles (445 BC) advocated organisms arising spontaneously and over time changing (evolving) into other forms, called the Great Chain of Being.  Heraclitus (530-470 BC) stated that life was a cycle begun with fire and driven by strife. Durant summarized their world view as, "Perception is due to the expulsion of atoms from the object upon the sense organ. There is or have been or will be an infinite number of worlds; at every moment planets are colliding and dying, and new worlds are rising out of chaos by the selective aggregation of atoms of similar size and shape. There is no design; the universe is a machine." (It should be noted that out of this view came little true empirical science or development of technology.) Lucretius (95-55 BC) consolidated these views in a treatise, On the Nature of Things, in which he expounded on a mechanistic origin and purpose for the universe.

Comte's positivism was popularized by Charles Darwin.  In 1859 his Origin of the Species
gave a superficial account of how life could have possibly been transformed from one life form to another without miraculous intervention; yet he never actually showed it to occur. He was well received. Hoyle has commented that the reason Darwin's book became popular is that it "broke the tyranny of Christianity over people". In the latter part of the 1800's the implications of naturalism (and its exclusion of God) were again (like in Greece) expanded to the humanities, e.g. law, education, ethics by Herbert Spencer (father of modern sociology), John Dewey (father of government education), and Francis Galton (Darwin's first cousin and a founder of eugenics, the process of improving the human race by selection). Hitler, Mao, and Stalin utilized their ideas to carry out genocides. Today, Peter Singer, ethicist, argues it is morally better to use "defective humans" than "healthy" rats for biological experimentation. Planned Parenthood Continues as the thriving offspring of the Eugenics Movement. Bertrand Russell, in the twentieth century, even pronounced that as man, through science, has harnessed the physical environment, so he will harness the "formation of human character." Many of the current colleges and universities remain dominated by naturalistic programs.

1)   The only reality is physical (Hume limits it to sensual perception alone).
2)    Since most concepts of God state He is spiritual; God is largely excluded (except for pantheistic views, i.e. God is nature).
3)    Corollary:  there is no purposeful design.  Religion or a belief in the supernatural is at best a deception and worse a fraud.
4)     All truth, all meaning to life is to be found in studying nature.
5)    Man using observation and reason can discover all truth.

Christian Teaching and Approach to Evangelism

1.    Christians accept the teaching that there is a supernatural, and that man is not just flesh. There is good reason for this although it can not be proven by simple physical measurements. The concept of causality argues for God, for we do see order and design in nature, contrary to much naturalistic thinking. For example, all of man's creative inventions employ principles  and concepts already inherent in nature, e.g. the computer is similar to the brain, the camera to an eye, a pump to the heart, etc. While some philosophers , like Hume argued against cause and effect, he was wrong. The Bible says in Romans 1:20, that the divine attributes and powers of God are made manifest to all men through the creation so that they are without excuse (in terms of knowing God). Affirming this in his time, John Calvin stated, "As the celebrated Cicero observes, there is no nation so barbarous, no race so savage as not to be firmly persuaded of the existence of God."

2.     All truth can not be contained in nature and natural  physical laws alone.  For as Phillip Johnson states, "If science produces  a universal  law for everything  then how can reasoning trusted, since all is reduced to a self propelling materialism?  All is self-referred." In other words, if we are simply organic masses activated by atom particles bouncing off our bodily sensors (as the Greeks believed, and modem reductionists), what use is reason; or even what is it? Yet Natural law, according to Thomas Aqµinas, and summarized by Charles Price is "a rule of reason, promulgated by God in man's nature, whereby man can discern how he should act."  It requires one to believe in God. In this the Christian has a great comfort.   The Bible tells him that the Almighty Creator will send His Spirit who will guide the believer into all truth. We are not as Pilate saying, "What is truth?". We can study nature, philosophy, and religion and trust God to guide us into truth. The only caveat is we must want to know Him and be willing to obey Him; for whosoever walks in "the light comes to it", and "all who call upon the name of the Lord will be saved".

3.       Certain aspects of naturalism are not all bad. The emphasis on empiricism, or the actual physical testing of hypotheses (see Chapter 5, Science), is useful and freed science from many of the wrong concepts of Aristotle (who conjectured but never really tested). Yet it is presumption to exclude the supernatural. Man simply does not have all knowledge. Interestingly, Christians played a prominent role in the development of the Scientific Method.

4.      Evangelism of a committed naturalist can be difficult, for they have fallen prey to the
pride of intellectualism. In some cases discussing the fallacy of excluding the supernatural is useful. In others the weaknesses and lack of empirical data for evolution can help. Still for others the logical moral implications of naturalism and evolution i.e. abortion, eugenics/racism can turn the mind and heart. Others just need the faithful witness of an honest, hardworking, kind yet truthful relative or associate.

To order a book from which the above excerpt was taken click on the link below. 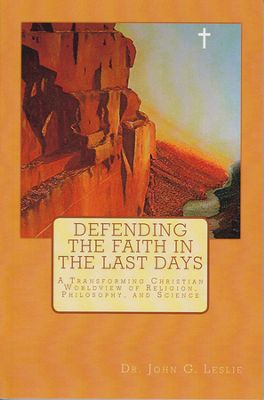 Defending the Faith in the Last Days