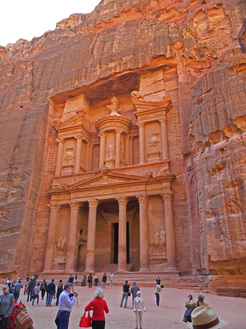 Petra: Part of Edom in the Old Testament

1 "The vision of Obadiah. Thus saith the Lord God concerning Edom; We have heard a rumour from the Lord, and an ambassador is sent among the heathen, Arise ye, and let us rise up against her in battle."

The Sin of Petra: Becoming Prideful in its Accomplishments

2 "Behold, I have made thee small among the heathen: thou art greatly despised.

3 ﻿The pride of thine heart hath deceived thee, thou that dwellest in the clefts of the rock, whose habitation is high; that saith in his heart, Who shall bring me down to the ground?

4 Though thou exalt thyself as the eagle, and though thou set thy nest among the stars, thence will I bring thee down, saith the Lord…
﻿
6 How are the things of Esau searched out! how are his hidden things sought up!... 9 And thy mighty men, O Teman, shall be dismayed, to the end that ﻿every one of the mount of Esau may be cut off by slaughter."﻿

10 "﻿For thy violence against thy brother Jacob shame shall cover thee, and thou shalt be cut off for ever…11 In the day that thou stoodest on the other side, in the day that the strangers carried away captive his forces, and foreigners entered into his gates, and cast lots upon Jerusalem, even thou wast as one of them.

God Pronounces Judgement Upon the Edomites

15 "For the day of the Lord is near upon all the heathen: ﻿as thou hast done, it shall be done unto thee: ﻿thy reward shall return upon thine own head.


God's Promise to Return Israel to their Land

17 "But upon mount Zion shall be deliverance, and there shall be holiness; and the house of Jacob shall possess their possessions."

"Obadiah
Obadiah is fourth in the listing of the Old Testament Minor Prophets, and the shortest. Chronologically, it was possibly the earliest of the prophetic writings, written c. 840 B.C., though some commentators place the writing in the 6th century B.C. Obadiah means "worshipper of Jehovah."

Obadiah's vision from the Lord was directed to Edom, also known as Esau (after the brother of Jacob, son of Isaac). It was given as a ﻿warning against pride and retaliation against the Lord's chosen people, and that ultimately possessions and position will mean nothing in the "day of the Lord." ﻿

Mount of Esau – This is modern day Petra; leading into the dwelling place of Esau, one must travel through a narrow gorge that leads to a tiny winding valley, eventually leading to walls with hundreds of tombs and dwellings carved in the face of them. ﻿From there, the Edomites looked down on the world around them. This was the "pride of thy heart" and "his hidden treasures," referred to in verses 3 and 4.﻿
Mount Zion – Also Jerusalem. The place from which the Lord established His earthly Kingdom and restored the inheritance of His people.

Edom – Also known as Esau. Twin brother of Jacob (Israel), sons of Isaac & Rebekah. ﻿Esau sold his birthright to Jacob for a bowl of porridge, and Jacob stole the ancestral blessing by deception, setting the stage for two nations in constant opposition. ‘Edom' refused to let the Israelites pass through its mountains to get to Canaan.﻿ David fought and won a battle against the Edomites when Saul first became king and they became servants to David (2 Samuel 8:14). ﻿﻿When Nebuchadnezzar destroyed Jerusalem in 586 B.C., Edom was a willing ally and stood by in derision as the people of Judah were plundered and exiled."

If you desire to read more: http://skipheitzig.com/teachings_view.asp?ServiceID=598&transcript=1&AcceptsCookies=yes

Petra: A Slide Show as it is today 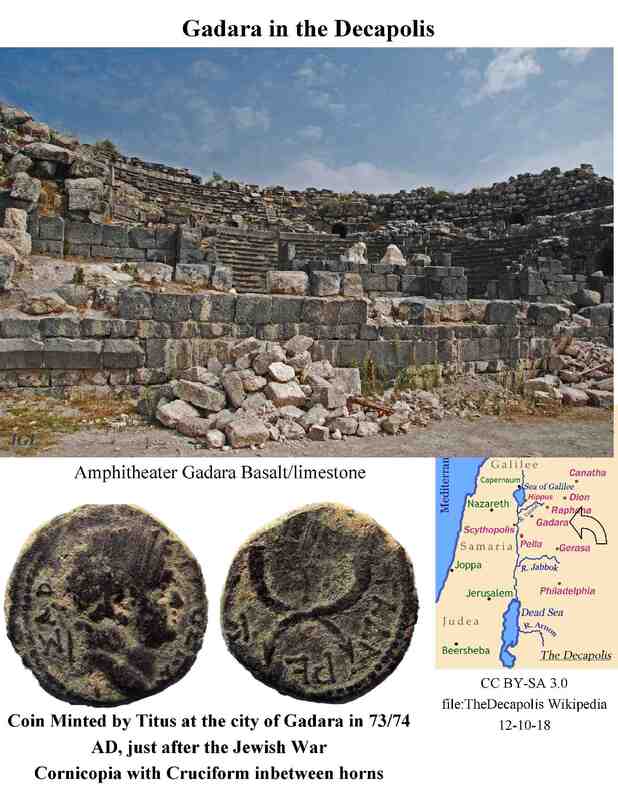 Mentioned in the Old Testament
Joshua 15
36 "And Sharaim, and Adithaim, and Gederah, and Gederothaim; fourteen cities with their villages:" KJV

Wikipedia Comments online 12-11-18
“Gadara (Hebrew: גדרה‎, Gadʾara, or גדר, Gader; Greek: Γάδαρα Gádara) was situated in a defensible position on a ridge accessible to the east but protected by steep falls on the other three sides.  It was well-watered, with access to the Ain Qais spring and cisterns.
A member of the Decapolis, Gadara was a center of  culture in the region, considered one of its most Hellenized and enjoying special political and religious status. By the third century BC the town was of some cultural importance. The Greek historian Polybius describes Gadara as being in 218 BC the "strongest of all places in the region". Nevertheless, it capitulated shortly afterwards when besieged by the Seleucid king Antiochus III of Syria. Under the Seleucids, it was also known as Antiochia (Ancient Greek: Αντιόχεια) or Antiochia Semiramis (Ancient Greek: Ἀντιόχεια Σεμίραμις, Antiókheia Semíramis) and as Seleucia (Ancient Greek: Σελεύκεια). The region passed in and out of the control of the Seleucid kings of Syria and the Ptolemies of Egypt. Gadara was captured and damaged by Alexander Jannaeus. In the early first century BC Gadara gave birth to its most famous son, Meleager. He was one of the most admired Hellenistic Greek poets, not only for his own works but also for his anthology of other poets, which formed the basis of the large collection known as the Greek Anthology. In 63 BC, when the Roman general Pompey placed the region under Roman control, he rebuilt Gadara and made it one of the semi-autonomous cities of the Roman Decapolis, and a bulwark against Nabataean expansion. But in 30 BC Augustus placed it under the control of the Jewish king Herod. The historian Josephus relates that after King Herod's death in 4 BC Gadara was made part of the Roman province of Syria.”

Further Sites like Capernaeum and Bethsaida can be viewed under the New Testament Related Artifacts tab.