Does God Bring Judgement upon Mankind?

2 Mercy unto you, and peace, and love, be multiplied.

3 Beloved, when I gave all diligence to write unto you of the common salvation, it was needful for me to write unto you, and exhort you that ye should earnestly contend for the faith which was once delivered unto the saints.

4 For there are certain men crept in unawares, who were before of old ordained to this condemnation, ungodly men, turning the grace of our God into lasciviousness, and denying the only Lord God, and our Lord Jesus Christ.

5 I will therefore put you in remembrance, though ye once knew this, how that the Lord, having saved the people out of the land of Egypt, afterward destroyed them that believed not.

6 And the angels which kept not their first estate, but left their own habitation, he hath reserved in everlasting chains under darkness unto the judgment of the great day.

7 Even as Sodom and Gomorrha, and the cities about them in like manner, giving themselves over to fornication, and going after strange flesh, are set forth for an example, suffering the vengeance of eternal fire.

Revelation 20:4 (KJV)
And I saw thrones, and they sat upon them, and judgment was given unto them: and I saw the souls of them that were beheaded for the witness of Jesus, and for the word of God, and which had not worshiped the beast, neither his image, neither had received his mark upon their foreheads, or in their hands; and they lived and reigned with Christ a thousand years.

Pompeii: An Example of God's Judgement and a Reminder to Modern Mankind?

Pompeii was a prosperous Roman town destroyed by a volcanic eruption of Mt. Vesuvius in 79 AD. Frescoes, buildings, and even the castings of people buried rapidly are preserved. It is a example of a local destructive force preserving local artifacts-in contrast to the massive destruction seen in the geologic record. It also well documents the decadence of Roman society for which the volcanic eruption there may well be analogous to the judgement of destruction (although by "fire from heaven" at Sodom) as that seen occurring at Sodom and Gomorrah (see links below). Example: there are frescoes of three people two men who are man with man and a woman having  sex simultaneously (This fresco is not displayed here). There is a house of Priapus with an obscene fresco of genitalia (not displayed here). There is a long panel scene with women "initiating" or prostituting themselves in the name of the god Dionysus (see below). Abortion and infanticide were very common, and associated with prostitutes, and some feel it helped lead to the collapse of the Western Roman Empire due to a population decline (especially female infants), but not the East where Christianity had more influence and children were more protected and the population grew (See article by Emmet Scott Role of infanticide...link below).
There are multiple temples to many other gods as well including Isis and Apollo. In the amphitheater, as was common in Roman cities, both beasts and humans were slaughtered in "games".
All of these were and are an abomination to the Holy God of Israel-Yehovah. Remember, Christianity and Judaism, though small had already expanded to Rome and other Roman cities-many Roman citizens and leaders would have had exposure to the Judeo-Christian scriptures. This apparently had less effect in the West than the East.
Another non-sexual fresco is portrayed below as well.

We may ponder what other catastrophic events in mankind's history have been allowed by God because of men disregarding His, God's, Laws.

See scriptures at bottom of page regarding God's forgiveness.
Homosexuality
The Role of Infanticide and Abortion in Pagan Rome
Degradation of Mankind Book of Romans
Archaeology-Possible Site of Sodom

Noah's Flood. Others Believed him and so should we! 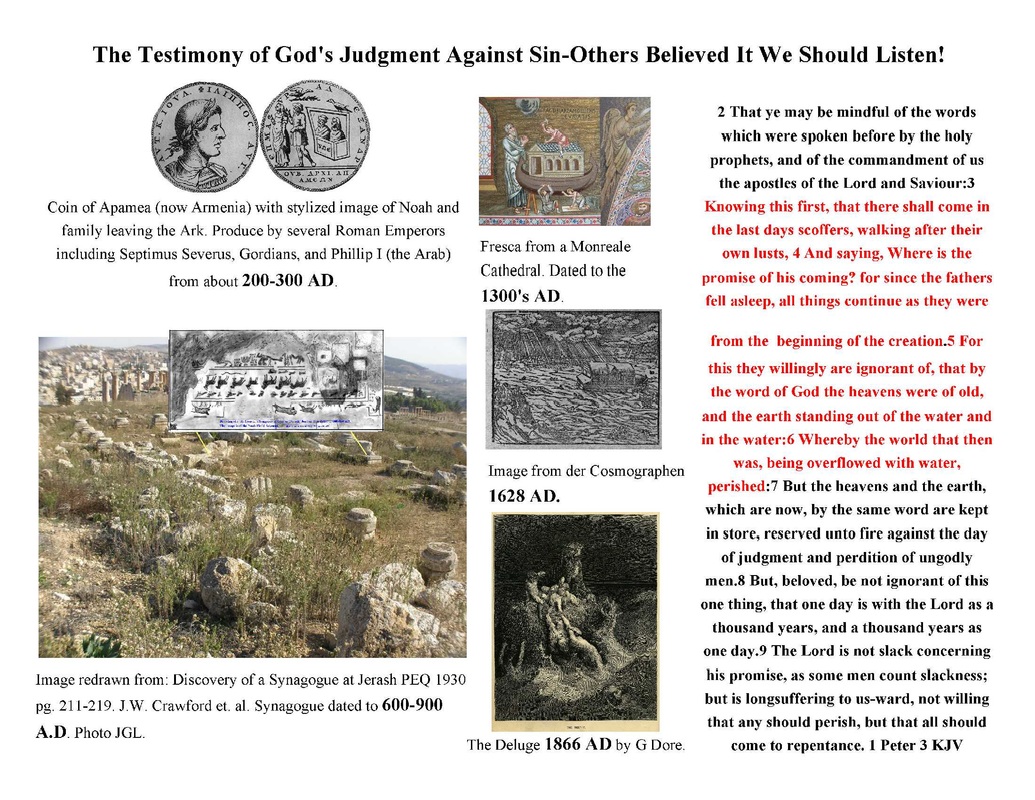 See John 8:1-11 This is the story of the woman caught in the act of adultery. The scribes and pharisees asked Jesus what should they do. The law made it legal to stone her to death (Lev. 20:10). But Jesus said "he who is without sin among you, let him be the first to throw a stone at her." He then wrote in the ground, and they  left one by one.  He then spoke to the woman and asked where the ones were who condemned her. She said "no one." He then said, "neither do I condemn you; go your way. From now on sin no more." And in 1 John 1:9 it says, "If we confess our sins, He is faithful and righteous to forgive us our sins and to cleanse us from all unrighteousness." NASB Bible