To say that controversy exists regarding the nature of the Noah flood narrative in the book of Genesis is an understatement. Answers to questions one might pose on the issue defy consensus, even amongst conservative evangelicals. The fact that answers have been attempted—by Bible scholars both conservative and liberal, geologists and geophysicists, archaeologists and historians, as well as researchers of both the scientific and pseudo-scientific kind—is not to say that adequate answers exist. But as an archaeologist who takes the Bible seriously as an historical document, I do my best to go where the evidence leads. With both textual and physical evidences in mind, I must conclude that there was, in fact, a Genesis flood that eliminated all but eight individuals—Noah, his sons and their wives—from the face of the earth, and that all subsequent humans are their descendants. For me, these conclusions are inescapable.

Hundreds of works dealing with Noah’s flood have appeared over the last century. In my opinion, this present volume by Dr John Leslie rises to the top. While the physical evidences presented in The Noah Flood Account as a True Narrative Representation appear in other resources, the outstanding and unique feature of Dr Leslie’s book is the examination of the subject using the TNR (true narrative representation) theory of Dr John Oller, revealing that the biblical flood story possesses all the characteristics of a TNR: determinancy, connectedness, and generalizability. Ollerian TNR linguistic theory is based on incontrovertible logic, and has the analytic capacity to assess the differences between TNRs, fictions, and lies. In his application of TNR theory, Dr Leslie has powerfully argued that the Noah narrative arose from the physical reality of the event itself in remote antiquity. Linguistically, the Noah flood account is not fiction. This is a quantum leap for those continuing to explore the subject!

Controversy over the “how and when” of the Genesis flood will continue, to be sure. The myriad approaches to it are diverse, and can even be contradictory. But Dr Leslie has injected into the discussion a methodology that perhaps transcends treatments of Noah flood physical dynamics by assessing its linguistic/literary features in a TNR context. Everyone interested in the Genesis flood story from a scholarly perspective owes Dr John Leslie a debt of gratitude for his willingness to tackle this difficult subject meticulously, with both rigor and thoughtfulness. The Noah Flood Account as a True Narrative Representation is a welcome and important addition to this field of inquiry. 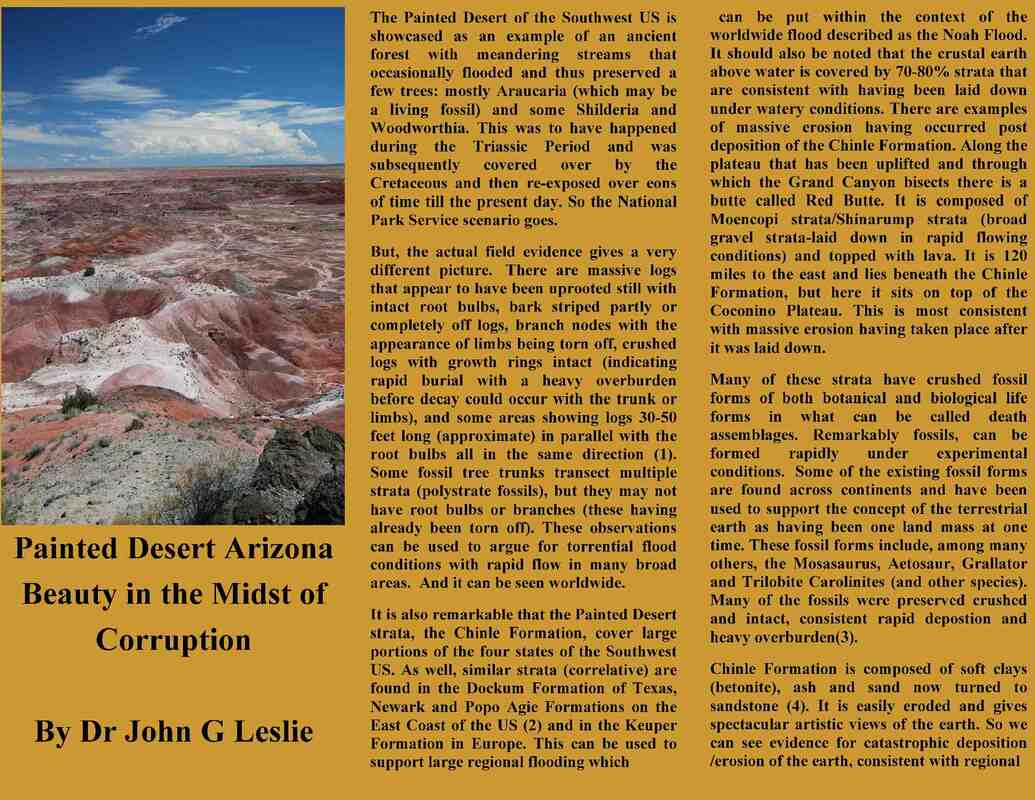 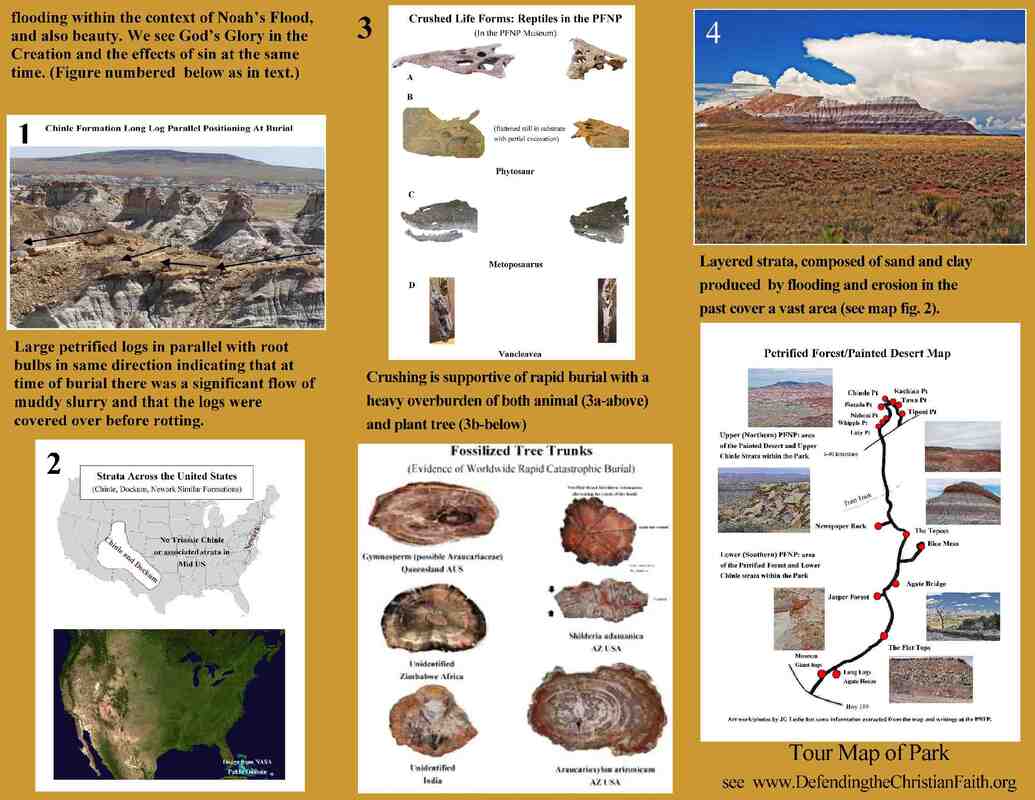 The Painted Desert  book will have much more information and documentation.

Noah and his Animals (A Book for Children) 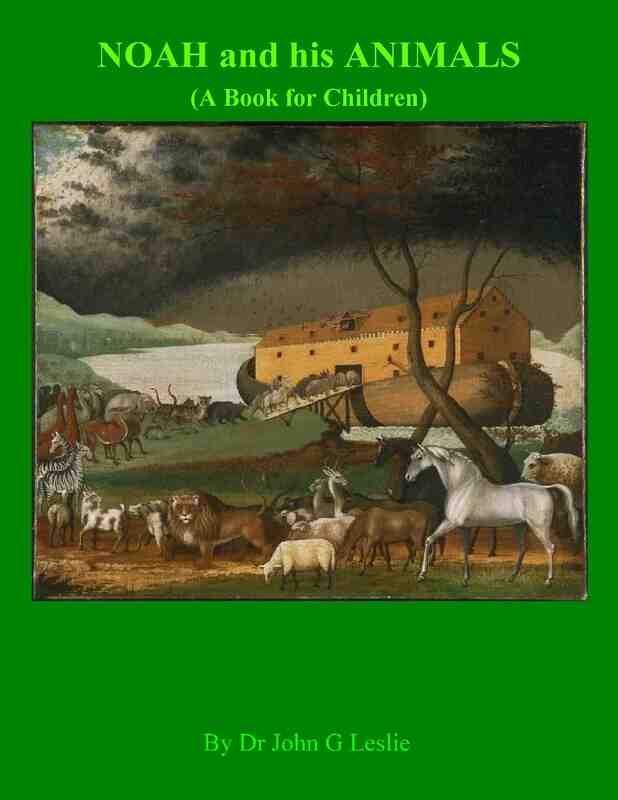 This book is in the making-please do not copy it. The art on the front is by Edward Hicks 1846-public domain. 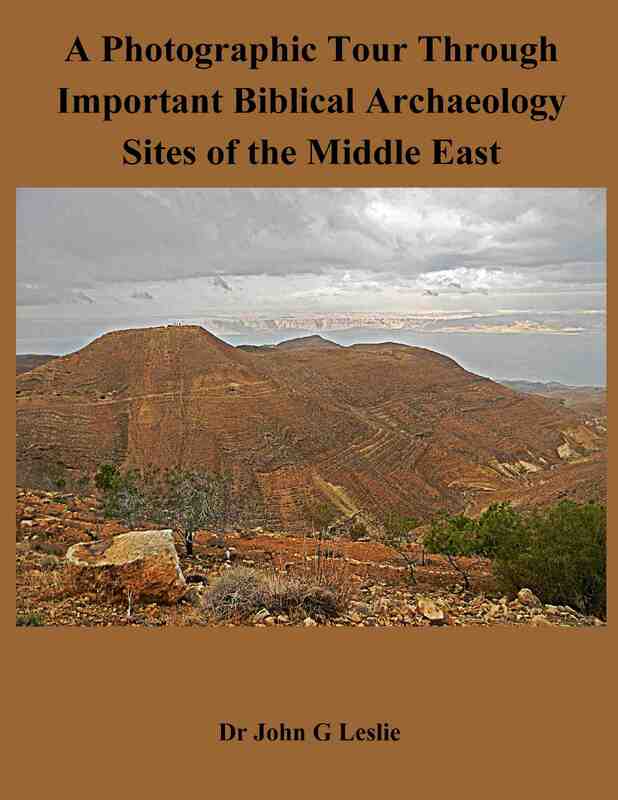 A Photographic Tour Through Important Biblical Archaeology Sites of the Middle East- Soon to Come please do not download picture (image by jgl).

"In the context of discussing the Noah Flood Account a correct understanding of it as a narrative can be better ascertained by a correct understanding of the fields of religion, science, and philosophy. These three categories are part of the fabric of every human being. How one views and integrates them together will affect their views on the Noah Flood Account".... See link below for more information. ​
Religion, Philosophy, and Science-CMI

"Biologists and other groups have tried to prevent creationism from being taught at our schools and universities, arguing that it is religious or Biblical. They do not seem to want students to hear or see scientific evidence that life could not have developed by chance. One may wonder why scientists, and particularly academics who have devoted their entire careers to seeking new truths, often under great personal hardship, would want to oppose another viewpoint based on available evidence. We believe that the basic reason for this opposition does not so much involve disputations of scientific facts between the two parties, although this may sometimes occur, but rather is a continuing struggle between two faiths—the faith which claims man to be dependent on God, and the faith which rejects God and demands a purely mechanical universe and existence"... see link below for more information..
Religious Nature of Evolution-CMI

Hindrance of Evolutionary Terminology to the Teaching of Science

"The present methods of teaching about evolution have resulted in a distorted understanding of science. This is reflected in the terminology used to expound supposed evolutionary events. These terms do not describe structure/function observations, but rather implied changes among non-observable progenic relationships. Presented below are representative samplings of the evolutionary terminology which is commonly used in children's, popular, college, and scientific sources."...see link below for more information.
Hinderance of Evolutionary Terminology-CMI

Mutation and Design in Cellular Metabolism

"This article is directed to the University undergraduate or biology teacher who is already familiar with cellular physiology. The main purpose of this paper is to demonstrate the unlikelihood of evolution philosophy which claims that mutations can be beneficial in some cases and that the long term accumulation of beneficial mutations can advance an organism to a more complex form — for example, and eye-less trilobite to one which can see. It will be shown that mutations lead to both a deterioration of the organism and a reduction in the adaptive potential of the species to future environmental changes. This would be more compatible with a creation philosophy of initially created complex life forms subsequently affected by deteriorative processes. Thus the article surveys what mutations are, and their effects on cellular metabolism. Natural selection is defined and its effect on mutational change in living organisms is briefly described. Other factors relating to the effects of mutations on cellular metabolism are also discussed."...see link below for more information.
Mutation and Design-CMI